To build new foundations for effective public service, community leadership and multicultural citizenship, the APYLP was founded in 1990 by legislative staffers in the state capitol.

The vitality and effectiveness of government depends on strong ties to the people in the community. By increasing Asian Pacific representation, government will gain a richer texture, and can better respond to the needs of people from all ethnic, geographic, socio-economic and cultural backgrounds.

To fulfill its commitment, APYLP depends on donations of time and money from a broad range of individuals, corporations, and university sponsors who believe in making a difference by giving teenagers attention, new aspirations, and a chance to dream of a better world.

Learn more about the Project's history, our board members, past and present sponsors, and read statements by those who have benefited from their involvement.

"Every year we would see hundreds of students converge on the State Capitol as part of Boys State, Girls State and the YMCA Model Legislature, but we rarely saw Asian or Pacific Islander students among them. Finally, a few of us got together and decided that we could create a more meaningful experience for API students. We are the insiders, after all."

These comments were made by one of the participants at a meeting of the Asian Pacific Legislative Staff Caucus in 1989, when the idea for the Asian Pacific Youth Leadership Project was born. The founders of APYLP were driven to action by the absence at that time of legislators of Asian and Pacific Islander descent, and by a seeming lack of interest in politics by the next generation. Over the next few months, the group worked feverishly to pull together the first conference. Only seven students applied. So the conference was canceled for that year and the group went back to the drawing board.

The following year, APYLP gained the attention of the State Superintendent of Public Instruction, who helped mail applications to all of the state's high schools. Applications began arriving in boxfulls. APYLP was off and running and soon incorporated as a nonprofit corporation.

APYLP refines the conference each year making adjustments for demographic changes in the Asian and Pacific Islander community, increased sophistication of students, the steady growth in numbers of API legislative staff, election of API Legislators, and emerging community issues. Aggressive fundraising was undertaken and new corporate sponsors were brought on board, providing APYLP with a balanced budget and the ability to offer a first-rate conference at no cost to the student participants. The original board of directors had decided that no student should have to turn down the opportunity to participate in the conference because his or her parents couldn't afford the trip.

Due to the conference staff's intimate knowledge of the legislative process and access to the State Capitol and its facilities, the cornerstone of the conference remains the Mock Legislature. By assuming the roles of elected officials and presenting bills for passage in committee and on the Senate Floor, students are able to put into action the public speaking, advocacy and other skills they gain in workshops they attend during the first two days of the conference. The opportunity to debate real-world issues and experience the influential role that elective office plays in their lives inspires students to consider their own career options. The supportive environment created by conference staff allows students to discover and explore their own leadership potential.

APYLP continues to draw students from across the state, from rural and urban communities, from small towns and big cities. Some of the 50 students selected each year to participate in the conference have strong backgrounds in leadership and student government, but many have little or no such experience. Instead, they have a strong desire to learn and a potential for leadership that has been recognized by their teachers and counselors. Together, these student leaders and potential leaders share in a new learning experience in the halls of the State Capitol. They face their fears of public speaking, learn to rely on each other to further a cause, and share personal experiences. They develop networks that could help them in future careers and friendships that could last a lifetime.

(Affilition listed for identification only) 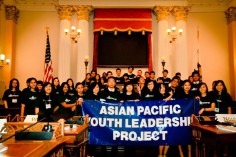 This program is FREE for all high school juniors and seniors who attend a high school in California who are accepted thanks to the hard work of our generous sponsors and our volunteers.

For Email Newsletters you can trust